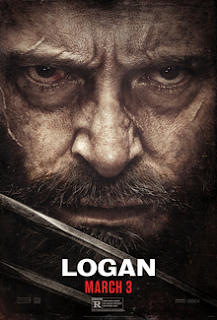 Inspired by the story/character “Old Man Logan”, “Logan” starts in the year 2029. Mutants are on the brink of extinction, with no new mutants having been born in 25 years. With his healing factor, James "Logan" Howlett, formerly known as Wolverine, is still around. Living with the last few mutants left in the world, Caliban and Professor Charles Xavier, Logan works as a chauffeur and hustled for drugs for the benefit of Prof X whose mind is deteriorating due to his old age.

However Logan is approached by a woman, Gabriela, who want to hire him to escort her and an 11-year-old girl named Laura to a place in North Dakota called "Eden". Logan refused but he is soon approached by a man named Donald Pierce who is looking for Gabriela.

After reluctantly accepting the job from Gabriela, Logan discovers that she has been murdered. Logan, Xavier, and Laura escape from Pierce and his cybernetically-enhanced men but Caliban is captured. Looking through a video left behind by Gabriela, Logan and Xavier learn that Laura is a mutant breed by a company called, Transigen.

Transigen has been breeding mutant children using DNA samples from several mutants for the "X-23" project, but as the children got older, the company found the children to be more difficult to control and decided to put them down. The nurses taking care of the children however thought differently and helped the children to escape. Gabriela is one of those nurses and approached Logan because Laura was created using Logan’s DNA. She is, for all intent and purpose, Logan’s daughter. From there, it’s a road trip with the trio trying their best to get away from Pierce and get Laura to safety.

First off, let’s get to the elephant in the room. Yes; not only is “Logan” is not only the swansong of Hugh Jackman as Wolverine, it is also the swansong of Patrick Stewart as Prof X. Both actors have indicated that this is the last time they would be portraying the characters and after seeing the movie, I hope both keep their word because this movie is a hell of a way to say goodbye.

“Logan” is great! It is not just a great superhero movie; it is a great movie period! A lot of people have said the movie is like a western and I could see why. Logan and Prof X are like two aging gunslingers going out on one last ride and they went out like heroes! This is a fitting end to the characters and I hope I never see Hugh Jackman or Patrick Stewart as Wolverine and Prof X ever again because they set the bar high in this movie and it’s just that hard to see how they could top it.

Not only that, “Logan” also set things up nicely at the end for Laura to take over the role as the Wolverine. Considering that X-23 has taken over the name of Wolverine in the comics already, this would exactly be in line with the comics. FOX could even use her and her friends as X-Force.

Outside that problem, the movie was great. “Logan” is a gritty, violent, but thoughtful superhero movie that in my mind is the best X-Men movie ever. The bittersweet yet uplifting end of the movie reminds me of the ending of La La Land; sad, sweet, and perfect. Watch “Logan”, this movie is great!
Posted by Ghost at 1:36 PM

Need a small business loan to get the working capital you need? Get quick & easy access to the funding you need,financing you need to help your business grow Quickly.Email: lendingcashhelpdesk@gmail.com
Blog:https://capitallendingfince.blogspot.com/