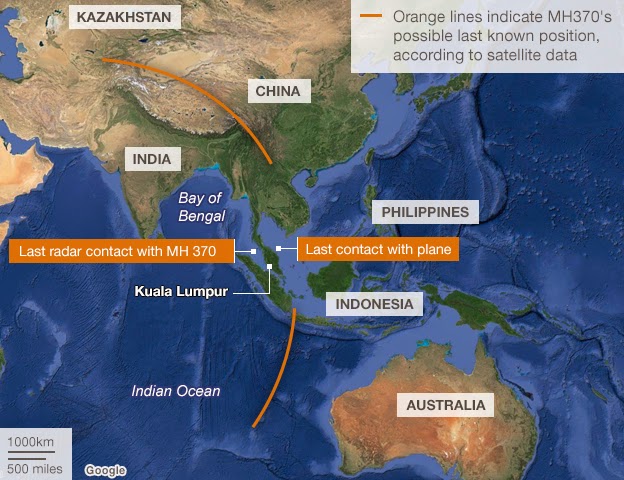 Unlike most Singaporeans who like to have a harmless laugh at our northern neighbor, I'm a Singaporean who gives them a benefit of a doubt. However the disappearance of Malaysia Airlines flight MH370 and its subsequent mishandling has been nothing short of laughable...if it wasn't such a tragedy.

Over a week after it disappeared, not only has the Malaysians not found the plane, the search area has gotten bigger and bigger. First they say the last contact with the plane was in the Gulf of Thailand when it was headed towards Vietnam. Then days later, they say it may have went down in the Strait of Malacca after flying across Malaysia. For the geographically challenged, Gulf of Thailand is east of Malaysia, the Strait of Malacca is west of Malaysia.

Not only do they have no idea where the plane crashed, now they're saying it might not have crashed. According to satellite evidence, which the Malaysian only released a week after the plane's disappearance, they now say the Boeing 777 could have continued flying for a further seven hours after its last radar contact! Now the search area now goes from central Asia to the southern Indian Ocean, over both land and sea.

Needless to say, China has been less than impressed with Malaysia's performance. With loud criticism coming from the world, acting Malaysian Transport Minister Hishammuddin Hussein has been under the cosh and has been nothing short of terrible. Even the likable Malaysian Prime Minister Najib Razak has been under pressure for his government's performance. So perhaps it is the time to seriously consider if it would be better if some other country like China or the U.S take over the search operations from the Malaysians.

The Malaysians will not like it but they had their chance and with around 25 countries now involved in the search operation, there are countries with more experience than they have in looking for a missing airliner. The Malaysians need to hand things over to someone else.
Posted by Ghost at 10:15 AM