The gold bikini has been sold! Any fan of Star Wars, or anyone who had seen the movies, know which bikini I am talking about.

The first time I saw Carrie Fisher wearing the gold bikini in The Return of the Jedi, I was like "Wow!" So I can totally understand why someone paid $96,000 for it. The slave bikini costume even includes the collar and several chain links as seen in the movie. Jell, I'm not that big of a fan for the movies and even I would want that bikini.

I can only hope The Force Awakens would have such an "iconic" costume. Carrie Fisher wore the bikini in 1983. 32 years after that scene, we need another one like this! 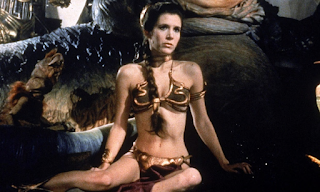